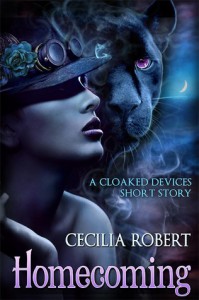 Wanting to hide a secret, Sera Czedar, a twenty-three-year-old panther shifter ran away from home after her mating ceremony. Five years later, she has made a life for herself as a part owner of a book store in Varselles. She is also a feared fighter in the rings; a much different person then the girl who left her home all those years ago.

Beta, Levian Grayson, has been grieving the loss of his mate, Sera. After five years, he found a lead to her whereabouts. She has been spotted in Versalles, a town where the roughest shifter outcast live. He sets out for Versalles with plans to bring her home, whether she wants to or not.

I enjoyed Homecoming. It is a quick book to read at 121 eBook pages. The Steampunk element made it different than most shifter novels. It also has some interesting surprises.

Cecilia Robert did a great job in the character development. She did an admirable job showing how the characters changed as a result of Sera’s abandoning her clan.

Homecoming formed an intriguing setting for the Cloaked Devices series. I look forward to Rise Book One in the series to be released in 2014.