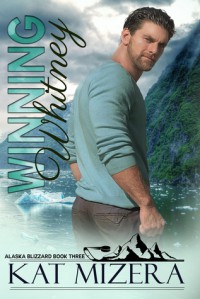 Kat Mizera scores a hat trick with the third book in the Alaska Blizzard series, WINNING WHITNEY.  I had been anxiously awaiting reading Whitney’s story ever since we were introduced to her in book two, HOLDING HAILEY.   Kane and Hailey helped rescue Whitney from a stalker in Boston.  In book three, Whitney relocates to Anchorage to work as Kane’s and Hailey’s nanny.  She is shocked when she runs into the man she had a one-night-stand with in Boston four years prior and has never been able to forget; the captain of the Blizzard, Jake Carruthers.  Talk about awkward.  Interestingly enough, Whitney is not the only one that never forgot their night together.

Kat Mizera did a great job with these characters.  Jake and Whitney have a lot of problems to deal with.  There are trust issues and lies through omission.  They have wonderful chemistry.  They are both good people that mean well.  I like how Jake and Whitney grow through the story.  Whitney did not end up being anything like I imagined she would be when we were introduced to her.  I was surprised by her background.  It made for a fascinating story.  It was nice seeing Jake get a second chance after the train wreck of his first marriage.

I enjoyed the plot.  It was unique and held me captivated.  It flowed well.  The hockey scenes are skillfully written.  I like that it touched on things that happened in the previous books but could be read on its own.  WINNING WHITNEY is a great addition to the Alaska Blizzard Series.  I voluntarily reviewed an advance reader copy of this book.