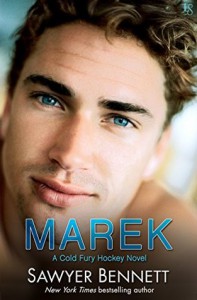 Sawyer Bennett melts the ice with book eleven in the Cold Fury Hockey series, MAREK.  I was anxiously waiting to read this story since book 10, REED.  Marek Fabritis is friends with Reed.  In book ten, Reed went with Marek to help stop the wedding of Marek’s ex-girlfriend, Gracen Moore.  At the wedding, Marek discovered that he and Gracen have a three-year-old daughter, Lilly, that he never knew about.  Marek’s story continues after the wedding.

The plot was exceptional.  It was realistic and heartfelt.  The characters were believable.  Marek understandably was angry after his discovery.  He didn’t handle the situation well and had a lot of growing up to do throughout the story.  I like Gracen.  She sacrifices a lot for the people she loves.  She’s a good mom.  She should have told Marek about Lilly, but the reason she didn’t was plausible. The two never got over each other.  They have issues to overcome.  I like that they had a second chance.

I’m glad Marek stopped the wedding.  Owen was not a good guy.  We discover some interesting things about Owen and his intentions throughout the novel.

I like that Josie’s ex/co-worker Aiden McCune made an appearance in this novel.  I thought it was interesting especially considering the things that happened with him in book ten.

I love the epilogue.  Lilly is too cute.  It was the perfect ending for the story.

If you haven’t read the other books in the Cold Fury Hockey series, MAREK could be read as a stand-alone.  However, I do recommend reading REED first.  There are many things that happen in the novel that are significant to this story.  That being said, I do recommend the entire series.  Sawyer Bennett’s writing is impeccable.  Each character’s story is unique.  I have loved every book in this series.  I voluntarily reviewed an advance reader copy of this book.