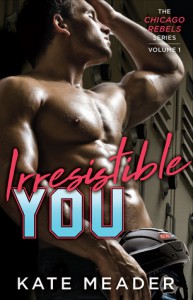 Kate Meader’s IRRESISTIBLE YOU is an excellent start to the Chicago Rebels series.  I have been anxiously awaiting reading this book ever since I read IN SKATES TROUBLE (Chicago Rebels #.5) in the HOT ON ICE hockey anthology.  I was not disappointed.  I loved this book.

Three half-sisters are left a hockey franchise, the Chicago Rebels.  The team is in second to last place. The sisters need to turn the Rebels around.  The first book focuses on the oldest daughter, Harper Chase.  She has been groomed to take over the team and is disappointed when her father’s will stipulated that all three sisters are left the team and have a year to make the playoffs or lose the franchise.  I love the plot.  It was interesting and full of obstacles.

I already liked Harper’s character in the prequel, IN SKATES TROUBLE.  I was excited to hear her story.  She is a strong character that is meant to run the Rebels.  She is an excellent leader and knows her hockey.  She brings in veteran center Remy “Jinx” DuPre to motivate the team.  Understandably, DuPre was not happy to be traded to a team that was in second to last place.  The two butt heads but can’t deny that they are attracted to each other. Of course, Harper being Remy’s boss complicates matters.  They have great chemistry and are an interesting couple.

I enjoy Kate Meader’s writing style.  The story flowed well.  I was not able to put down the book.  There were some good life lessons in the story.  I loved the scene where Remy and Harper played video games against each other.  IRRESISTIBLE YOU had a great ending.  I look forward to reading middle sister, Isobel Chase’s story in the next book, SO OVER YOU.  I voluntarily reviewed an advance reader copy of this book.